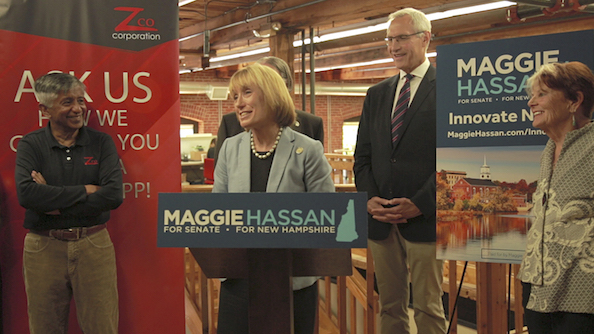 Zco’s President and Founder, John Olapurath, spoke first and thanked Governor Hassan for her focus on innovation. He stated how important continued business innovation is for the software industry here in New Hampshire.

“We need an innovative community to hire from,” said Olapurath, who is a University of New Hampshire graduate.

“It is truly great to be here at Zco, a strong example of the type of innovative business that is helping to move our state forward,” Hassan said. “For over 25 years Zco has not only adapted to changing technology in order to thrive and grow, but they have also been valued members of the Nashua community. Thank you for the work you do every day to drive innovation and help keep our state’s economy moving in the right direction.”

She described her Innovate NH 2.0 plan as a roadmap for fostering innovation, supporting job-creating businesses, and expanding opportunities for hardworking New Hampshire families.

“We know that innovative businesses and entrepreneurs are the engines of economic growth in the 21st century economy,” said Hassan.

Hassan is running for the U.S. Senate seat currently held by Kelly Ayotte. The above plan is an outline of what Hassan says she will take to the Senate to support inclusive economic growth in NH within a changing American economy. She also called for the federal government to follow New Hampshire’s lead on these important issues.

Hassan also mentioned the success of the Live Free and Start initiative that has been helping companies start up and grow here in NH. Her Innovate NH 2.0 plan builds on this and calls for reducing the regulatory burdens placed on new companies so they can focus on getting their business off the ground. She hopes that this initiative will help keep the granite state an appealing place for innovative startups to build their businesses.

With one of the lowest unemployment rates in the nation and more people working in NH than ever before, Hassan aims to continue this trend and continue to build a thriving and growing middle class. Her plan aims to enable all Granite Staters to succeed in the modern economy.

To continue to grow and retain workers she mentioned that she would continue to fight for the proposed commuter rail project that would connect Boston to Nashua and Manchester, NH. The project would create hundreds of jobs and is part of the critical transportation infrastructure plan.

Hassan ended her speech on her continued focus on higher education. Her budget plans passed within her term as governor invest in economic priorities such as making college more affordable. During her tenure she has frozen tuition costs at state universities and lowered tuition at state community colleges. In addition she has pushed an effort to align community college programs with NH business needs. Working to expand apprenticeship opportunities and to help support adult workers gain new skills is also a focal point for Hassan to help keep NH as one of the best places to live and earn a living.